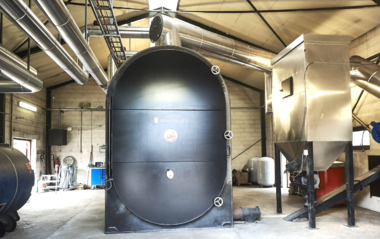 0 (5.0) 5
Price:
Calculation of the price individually 0 грн
0 грн
Details of the product are in description of goods.
Description Reviews

The Faust automatic straw-fired-boiler type Bio-flow Ⅱ 370 to 2470 producing from 450 to 2500 kW is built in a similar pattern to the Faust bio-Flow Ⅱ for Wood chips and wood pellets. Instead of a step grate, a pushrod system moves to force the fuel and ash inside the boiler through the combustion zone.

The primary air is added at the surface of the fuel bed, in order, to avoid blowing air direct into the fuel, this would create explosive combustion due to the rapid gasifing of the straw, this is also important to avoid high temperatures arising inside the bed of the burning straw, these high temperatures result in melting ash, followed by clinker issues. The pushrod system moves the fuel and ash bed in waves from the stoker auger to the ash auger at the end of the burning chamber. These waves help to crack eventual clinker so it is not settling in zones that cannot be moved.

If the straw is burned on a step grade the step insulates the radiation of heat downwards, resulting in sintering of the ash. In Faust bio-Flow II Straw the ash is capable of radiating its heat to cool surfaces downwards. This gives the minimum of sintering. The mechanical forced flow of the fuel and ash ensure that the retention time in the hot zone does not become too long, this also results in very low sintering.

Faust straw shredders are designed to rip big bales in 122 x 122 x 250 cm and 122 x 90 x 250 and optimally dose the straw for a continuous and modulating combustion in an automatic 400 kW to 12 MW straw-boiler. It is crucial for the function of an automatic straw-boiler that the dosage of fuel is steady, as the ripped straw is quickly gasified. A slight inaccuracy in the dosage will result in a rapidly fluctuating combustion intensity, with either high oxygen or a lack of oxygen.

Along with the Faust Bio-Flow boilers and specially developed augers for straw, together they form a fully automatic straw-fired-boiler-system.

Faust straw shredders are installed with two vertical mounted drums that spin each way round on their own axis. Unlike horizontal mounted drums, which typically go the same way round, the advantage with vertical mounted drums is that they tear the layers in the bales in opposing ways. In theory, it takes away the risk that an excessively large layer is torn off which can cause dosage problems and in worst case a stoppage. The drums lean backwards away from the bales with a displacement between top and bottom – usually a bit larger than a layer, this means that the bales are continually ripped at more than one layer at a time. The drums are provided with specially hardened teeth that frees the straw from the bales.

Faust straw rakes are protected with frequency converters on all of the motors. The Faust BM-control ensures that the dosage is continuously adaptable to the needs of the boiler. Through the BM-control, the shredder, as well as the boiler, can be monitored on the internet by both the customer and Faust. Faust also offer a service where you receive texts with information and alarms directly to your phone.

Faust straw shredders can be delivered with different lengths of straw conveyors and/or joined with an automatic Faust crane with a Straw bale grip, this uses the same type of Faust BM-control as the shredders and boilers, and therefore provides the same options of service.

Ripped straw can be transported with air or augers. Faust offer both types of transportation. The Faust augers are specially designed to transport straw and the outlet design makes it easy for the ripped straw to be discharged from the auger, even though both the top and bottom of the augers are suspended on bearings. This secure bearing of augers gives an almost noiseless operation.

With larger amounts of straw, for instance the production of straw pellets, the augers can also be made as a double option.

Transportation of straw in augers can have big advantages when dosed properly, as it is by Faust. When straw shredders and augers mirror each other in speed, the straw filling in the augers will be the same, Faust have the augers running at different speeds, this makes it easy to infinitely adjust the dosage of straw to the combustion requirements. If the combustion requires the delivery of straw to be stopped momentarily, the augers will stop as well as the delivery.

Ripped straw can also be transported by air flow, this is generated by a fan, that blows into a piping system. The straw is exhausted from the air flow by a cyclone. The advantage of the air transportation is, that it is less dependent on the placement of boiler and straw shredder as the auger option.