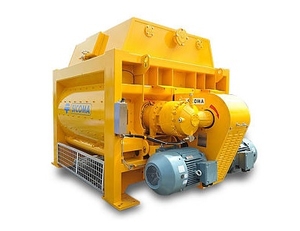 12 (4.8) 5
Price:
Calculation of the price individually 0 грн
0 грн
Details of the product are in description of goods.

Like planetary mixers, the two-shaft mixers MAO of SICOMA are distinguished by their exceptional reliability and the highest quality of mixing.
ALC "Plant of automatic dosing systems" supplies two-shaft mixers of the MAO series with a capacity from 1.0 to 8.0 m3 for the output of compacted concrete for one batch cycle (yield of unconsolidated concrete is 20% higher).

Heavy Duty Mixer Drum
The rigid design of the drum reduces the risk of deformation when the mixer is fully loaded and ensures the flat position of the mixers of the mixing shafts. The metal structure of the intermediate hopper of aggregates and scales can be mounted directly on the mixer without additional supports. The mixing drum is lined with Ni-hard cast iron plates, with a minimum Brennel hardness class of 530NV.

Mixer arms and blades
The design of the mixing arms, made of cast iron of spherical profile, allows to avoid sticking of a concrete mixture on them. Mixing blades are made of cast iron Ni-hard, with a minimum class of hardness according to Brennel 530NV. The number of blades, their position and orientation provide an optimal combination of rotation and circulation of the material during the mixing process.

Shaft Supports and Seals
Modular bearing bearings, patented by SICOMA, have two separate housings. The bearings are lubricated for a long service life. Sealing units of mixing shafts with a unique system of rotating discs in opposite directions, treated with liquid lubrication.

Automatic lubrication system
Lubricant, which helps to counter-rotate the discs, is fed automatically via the oil distributor. The necessary amount of lubricant (0,08 kg / h), its low consumption, and also minimum grease penetration into the mixer are guaranteed.

Reducers
Mixer reducers are epicyclic. The first stage is made in the form of a pulley transmission with a universal hinge of constant speed synchronizing the operation of the shafts. Low speed of the input stages provides low temperatures for lubricating oils. The reducer is connected to the mixer drum by means of drive belts, which provides the greatest rigidity of the connection, and also simplifies the assembly and maintenance of bearings and sealing units.

A unique option has been developed in recent years to reduce the time required to maintain shaft supports. All parts of the engine (motor, pulleys and gears) are attached to both sides of the mixer drum and can be easily opened without the use of a crane or other lifting devices.
Thus, the downtime of the BSU is reduced to a minimum, thereby reducing the maintenance cost.

Inspection hatch
The upper cover of the mixer, 500 mm wide, is equipped with two inspection hatches, which provides good access to the inside of the mixing chamber, or for cleaning it, including hard-to-reach areas, or for maintenance in a short time.

Unloading gate
The discharge gate has a reliable rubber seal around the perimeter. The eccentric rotation of the bolt ensures a tight fit and pressure of the seal, minimizing its wear.

Service platform
The service area includes a staircase. Their installation is easy and does not require the use of a crane or winch.

Double discharge gate (option)
The mixer can be equipped with two independent unloading gates, which allows you to feed ready-mixed concrete in two directions. The number of blades, their position and orientation provide an optimal combination of rotation and circulation of the material during the mixing process.

Smaller discharge valve (option)
Smaller than the standard for this type of mixer, the size of the discharge shutter allows the use of a smaller discharge funnel, which in turn reduces the height of the mixer support frame.

Automatic cleaning (optional)
Located above the mixing shafts, two pipes with multiple nozzles are fed into the mixer with high-pressure water for washing. These nozzles rotate, providing effective washing of all sections of the concrete mixing chamber. The mixer is washed after each working cycle. The water after washing is used in the next batch.

Emergency block (option)
The mixer has several temperature sensors for motors and reducers, lubrication level of reducers and hydraulic stations, level and pressure indicators of the lubrication system.
At the request of the customer, an electronic system ("Black box") is provided for reading from the sensors and recording data on the type, number and duration of all malfunctions occurring during the operation of the mixer. The unit can be programmed for preventive maintenance.

Unloading bolt of the "Bombolyuk" type (option)
All SICOMA twin-shaft mixers can be equipped with a discharge shutter of this type, which allows to open almost half the bottom of the mixer. At the same time, a high discharge speed is achieved, even when working with rigid mixtures.

Manual control panel (option)
An optional manual control panel for the mixer is available (buttons: start / stop, opening of discharge gates and emergency stop). The panel also includes the operation of the low-speed shaft motor, if any.

Low speed shaft motor (option)
The mixer can be equipped with a low-speed shaft motor. This is necessary for technical inspection, adjustment or rinsing of the mixer. It is allowed to work shafts even with open inspection hatches.

In addition, at the request of the customer, the following can be supplied: an unloading funnel, a dedusting element, a skip with a double rate of descent / lifting, an intermediate hopper for loading inert materials.